We used to live in Spain when I was very little (my dad was in the Navy). Although I don’t remember much, my mom said there were big cauldrons of oil on the street corners where people would fry churros. One thing my mom remembers is that these churros weren’t very sweet at all. The chocolate sauce probably made them sweeter, but the churros in and of themselves were just a fried dough. I’m pretty sure Spain was where they originated, but I could be totally wrong about that so don’t quote me. Lol! At some point, the churro became one of Mexico’s most well known treats.

How I Came Up With This Recipe

I have to say that SO MANY of my recipes and knowledge come from classes I’ve taken on Bluprint. And I have to give credit where credit is due. Right now, they’re having a special that will allow you to try a month of Bluprint for only $1!!! That is such an outstanding deal, you really shouldn’t pass it up. Click here to start your trial now.

The class I took to learn how to make these cupcakes was The Perfect Cupcake by Jennifer Shea. Jennifer is the owner of the famous west coast Trophy Cupcakes. In the class, she shares many of her recipes and techniques for making the best cupcakes, and I love ALL of them!

After making the simple vanilla cupcake batter, sprinkle each with a cinnamon sugar mixture before baking. The cinnamon mixture bakes up kind of crackly, which I just love! Top with a light and fluffy cinnamon buttercream and a little pie crust “cookie.” The swirl on top of these gluten free churro cupcakes is Trophy Cupcake’s signature “Trophy wave” that Jennifer Shea teaches how to do. I love that it’s a little different from the norm.

If you’re looking for that special something to go with your Cinco de Mayo spread, look no further than these gluten free churro cupcakes! You’ll be asked for the recipe, I guarantee it. 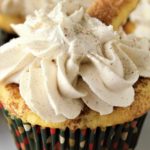 If you want to make the cute mini churro “pie crust cookies” I made, using leftover pie crust scraps roll out and cut with decorative ribbon cutter into about 2 by 3-inch sticks, brush with melted butter, and sprinkle with cinnamon and sugar. Bake at 400 degrees for about 5-10 minutes, or until golden.