Move over, Swiss and Italian meringue buttercream.  French buttercream is the most luxuriously silky smooth frosting you will ever put in your mouth!!

I LOVE, LOVE, LOVE a good buttercream frosting, don’t you?  I mean, the frosting really IS the icing on the cake, so to speak.  Without the frosting, the cake is just…cake.  There is nothing wrong with just…cake, but when you add frosting to cake, it becomes a whole different animal.

I’ve been making frostings from scratch for as long as I can remember.  I was always into baking and cake decorating. When my grandma was in town for my high school graduation, I made her a teddy bear-shaped cake for her birthday.  What the heck was I thinking? A teddy bear? I guess that’s the one pan I had and back then, decorating cakes was all about putting a million stars on the cake to fill in each area, haha!

For the longest time, if you wanted a shaped cake, you had to shape it yourself like my mom would do (see this post).   My mom always made homemade frosting to go on her cakes, just like I do now. I’m not one for buying pre-made things, especially frostings!  No offense to anyone who is.  I just like to make most everything from scratch because I feel scratch baking is far more superior than pre-packaged.

Since my kids’ first birthdays, I’ve been making their cakes from scratch, complete with homemade buttercream and sometimes fondant, too. I remember those cakes usually being some character they were into at the time (Blue’s Clues, anyone?). All of them were iced and decorated with French buttercream.

What is French Buttercream?

As you can imagine, using the yolks will make a richer frosting. It’s also not overly sweet, like a lot of American buttercreams tend to be (not mine, though).

French buttercream is, in my opinion, the BEST buttercream ever! I think anyone who’s ever had any of my cakes or cupcakes would agree.  Scott told me a long time ago that I should put this in jars and sell it by itself.  Haha!  I don’t know about that, but he’s basically expressing how much he loves this frosting 🙂

It’s surprisingly easier to make French buttercream than you’d think. There is one tool that you’ll need, though, and that’s a candy thermometer. You need to cook the sugar syrup to the correct temperature before slowly drizzling it into the egg yolks.

Begin by placing the sugar into a small saucepan. A trick I learned from a class I took on Bluprint is to always start any sugar syrup by adding the sugar to the pan first, and then slowly pouring the water around the outer edge of the pan. What this does is lessens the chance of having sugar crystals cling to the side of the pan.

Another trick I learned from that very same class on Bluprint is that you should NOT stir sugar syrups! Doing so will only cause sugar crystals to adhere to the sides of the pan, which means you’ll need to wash those sugar crystals down.

Adding the Sugar Syrup to the Yolks

Once all the syrup is in the bowl, turn the mixer up to high and whisk until the eggs have lightened in color and texture. The bottom and sides of the bowl will feel lukewarm to the touch. This can take anywhere from 5-10 minutes, depending on the temperature of your room and egg yolks.

Now you’re ready to add the butter. Add one chunk of butter at a time, allowing it to fully mix in before adding another chunk. At some point during this process, your mixture may begin to look curdled. That’s perfectly normal. Just keeping adding the butter and it will smooth out.

At this point, you can add any flavoring of your choice. In the video, I added lemon zest and freshly squeezed lemon juice. But the sky is the limit when it comes to flavoring French buttercream. Just remember, because of the yolks (and the butter, too) your frosting will always have a yellowish tint to it. I once read something about adding a swipe of violet gel color to offset that tint, but I’ve never tried it myself.

I’ve been making this frosting for so many years and wish I knew where I got it from. I wish I could give credit where credit is due because this is one of my most treasured recipes!  Over such a long time period, I’ve flavored this buttercream so many different ways.  It takes well to so many amazing flavors.  Here are some suggestions (feel free to adjust amounts to taste):

If you’d like to taste the most luxurious, smooth, and silky buttercream you’ve ever had, give French buttercream a try.  I think you will find it to be your new favorite!! 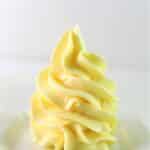 This recipe was originally posted on November 7, 2018 and has been updated with new pictures and a new video.