Who loves peanut butter as much as I do?  Because the BEST peanut butter fudge is right around the corner from being in your kitchen.  It’s creamy,  dreamy, and unbelievable!  Go make this now for your Christmas goody tray!!

Years and years ago, at a local landmark named Waterside (which was like a mini mall with a food court and shops) there was a Fudgery downstairs in the food court.  Whenever one of the fudge mixtures would be ready, they would ring a bell so people could watch the fudge being made.  They would pour the mixture onto big marble blocks.  Then they’d pick up these giant paddles and sing while working with the fudge, constantly stirring it and flipping it up in the air.

HOW TO MAKE OLD FASHIONED FUDGE

Usually old fashioned fudge recipes are ones in which a sugar mixture is boiled until it reaches a softball stage (about 238-240 on a candy thermometer.  Because of this, they are much more creamy and smooth.  I’m not knocking the easy fudge recipes out there.  There are some great ones.

In this peanut butter fudge recipe, boil the sugar and cream until they reach 238 degrees on a candy thermometer.  Carefully take the saucepan off the heat to avoid disturbing the sugar/cream mixture.  Add half the peanut butter, all of the butter and vanilla on top of the mixture, but DO NOT stir.  Let the mixture sit, undisturbed, until the bottom and sides of the saucepan are only warm to the touch.

Begin beating the fudge vigorously with a wooden spoon until it loses its shine and stiffens (this may take 5 minutes or so).  Once this happens, dump it onto a sheet of waxed paper or parchment paper.  Spread the other half of the peanut butter onto one side and then flip the other side over onto the peanut butter.  Let set until completely cool.  Cut into squares.

If you’re a peanut butter lover like I am, you’ll want to make this recipe for your Christmas tray (if you don’t eat it all yourself)!! 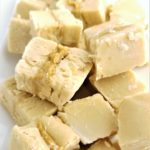 Who loves peanut butter as much as I do? Because the BEST peanut butter fudge is right around the corner from being in your kitchen. It’s creamy. It’s dreamy. It’s unbelievable! Go make this now for your Christmas goody tray!!
Print Recipe
CourseDessert
CuisineAmerican
Keywordfudge, peanut butter
Prep Time10 minutes
Cook Time15 minutes
Total Time25 minutes
Servings3 dozen pieces
AuthorKim