Nothing says Fourth of July like these gluten free red white & blueberry cupcakes! They’re filled with a blueberry compote and topped with strawberry swirled buttercream and fresh blueberries 🙂

I’ve really been on a cupcake kick lately, but no one around here seems to be complaining about it. Scott loves my cupcakes so he’s in heaven. Haha!

When I think about the Fourth of July and sweets, I think about fresh berries. And because nature already took care of the American flag colors, (at least the red and blue), they’re perfect!

When I came up with these cupcakes, I took inspiration from one of the many Bluprint classes I’ve taken. I sure do mention Bluprint all the time, but it’s only because I’ve gained SO much knowledge from all the classes I’ve taken and there’s just so much to share!

HOW TO MAKE THE BLUEBERRY COMPOTE

If you’ve made my gluten free blueberry pie, you already basically know about this blueberry compote. It’s really just another name for blueberry pie filling.

Combine fresh blueberries, lemon zest (I use this lemon zester), sugar, and a little bit of butter in a saucepan and cook down until the berries release their natural juices. Then add a small amount of cornstarch mixed with fresh lemon juice (I use this lemon squeezer) to the mixture to thicken everything up.

Then chill the compote until ready to fill the cupcakes. I use this cupcake corer to “core” the cupcakes, but you can easily use an apple corer, melon baller, or even just a spoon. Just don’t go all the way down or your filling will ooze out of the bottom of the cupcake.

WHAT’S THE SECRET TO THE BEST STRAWBERRY BUTTERCREAM?

To get a strong fruit flavor in buttercream, there’s a fine line between not adding enough fruit puree and adding too much, causing the buttercream to separate. This is due to the extra liquid.

I happened to have a bag of freeze dried strawberries in my pantry and decided to whirl them up in my Ninja smoothie cup to create a strawberry powder.

I added the powder and about a tablespoon of strawberry preserves to the vanilla buttercream and OMG, ya’ll! This AMAZING strawberry buttercream was born!! It’s like I just went strawberry pickin’ and pureed them into this frosting. A strawberry EXPLOSION with such a concentrated strawberry flavor!!!

Another thing I learned from the brilliant Jennifer Shea in her Bluprint class is how to create the swirl of colors when frosting cupcakes.

There are a couple different methods, but what worked for me is to fill three smaller bags (I use these disposable decorating bags) with the different colors. Then load them in a larger decorating bag fitted with an open star tip (tip 1M) and squeeze away! I use rubber bands to secure the frosting in each bag before putting them into the larger bag. 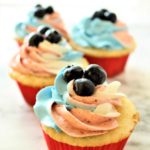 FOR THE BLUEBERRY COMPOTE

FOR THE STRAWBERRY BUTTERCREAM