Oh my gosh, ya’ll!!! Decadent, tender vanilla cake dipped in melted butter and rolled in sugar. These gluten free golden eggs are so incredibly addictive, you won’t be able to stop at just one.

If you read my Fabulous Gluten Free Italian Bread post, you know that I’m a super big fan of Bluprint (formerly Craftsy). Over the years, I’ve purchased too many classes to count, all either cake decorating or baking classes. They were ALL extraordinary classes and I continue to watch them over and over again (when purchased, I can view them for life).

I was first introduced to Gesine Bullock-Prado’s baking expertise when I purchased her class on making puff pastry. Her teaching style is laid back and fun with all her vast amounts of knowledge in between. I’m a HUGE fan of hers and eventually bought all her cookbooks. Granted, they’re meant for gluten-eating people, but that’s where I always start and then modify for gluten free.

In one of Gesine’s many books there is a recipe for Golden Eggs. It’s originally gluten free, but she actually does list an alternative for gluten free Golden Eggs. However, I like to make my own adjustments using my own flour blend. When I made these eggs with just a few tweaks to make them gluten free, I was BLOWN AWAY at how unbelievably great they are!! I mean, OH.MY.GOSH!!! That Gesine really knows what she’s doing.

This is a bit of an unusual recipe for cake, but I think that’s what makes it so, so tender and moist.

Seriously, ya’ll. You HAVE to make these golden egg cakes. They are just BEYOND anything I’ve ever had, and I’d go so far as to say the cake part itself might just be my absolute favorite vanilla cake EVER!!! That’s a huge statement considering I’ve made and eaten many, many vanilla cakes 🙂 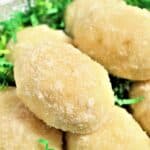