If you think you don’t like carrot cake, just give these gluten free carrot cupcakes a try! The addition of dried fruits, as well as the blend of spices, makes these flavorful cupcakes extra special 🙂

I’ve always loved carrot cake, and when I stumbled across this carrot cake recipe on Instagram by one of my most favorite pastry chefs, Zoe Francois, I just HAD to make it!! Zoe has such a bubbly personality and it comes through in her baking. Everything she makes is so unique, flavorful, and beautiful and she makes it all look so easy! I’ve taken a few of her classes on Bluprint, which were all wonderful. You should check them out!

What’s So Great About These Cupcakes?

I love several things about these gluten free carrot cupcakes, but what I love the most is the addition of chopped dried cherries (yes, cherries, NOT raisins for all you raisin haters), and chopped dried apricots! I have never seen these two dried fruits in a carrot cake (or really any other cake) and they just happen to be my two FAVORITE dried fruits! There is also shredded coconut in the batter, and the carrots are finely shredded. If hand shredding, use the small hole side of a box grater. OR, like Zoe says, run them first through the shredding disk of your food processor and then switch to the chopping blade and finely chop the carrots. It really does make a difference somehow (I think it makes the cakes more moist).

Zoe uses a cream cheese frosting for her carrot cake, but I’m not hugely fond of cream cheese frosting. I chose Italian meringue buttercream, one of my favorites. It’s similar to Swiss meringue buttercream, but instead of whisking the sugar and egg whites over a double boiler, the egg whites are whisked in a stand mixer while a sugar syrup is boiled on the stove and slowly poured into the egg whites.

What I like most about this method is it requires less active time. No standing over a hot stove whisking away. Start the sugar and water boiling, place a candy thermometer in the pot and don’t stir a thing. Just let it come to the proper temperature. Meanwhile, begin whipping the egg whites in the mixer. When the sugar syrup comes to temp, slowly and carefully pour it into the beating egg whites, aiming right along the side of the bowl where the egg whites meet the edge. Don’t let the syrup hit the whisk or it will go flying everywhere and that’s not good!

Allow the meringue to continue to whip away until stiff peaks are formed, but most importantly until the sides of the bowl are cool to the touch. This could take anywhere from 5-10 minutes. Then add the butter, a few tablespoons at a time. There will come a point where the mixture might look curdled. Just forge ahead! It’ll smooth out as it continues to whip and more butter is added.

Hop right on the bunny trail and make these gluten free carrot cupcakes. They’re too good to pass up and they’d make a wonderful Easter treat! 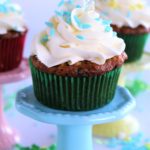