I love apple pie and this gluten free apple crumb pie does NOT disappoint! It’s everything you’d want in an apple pie–juicy apples layered in cinnamon sugary goodness with a flaky crust–but that crumb topping? Oh my gosh, ya’ll! Crunch, crunch, crunch 🙂

It’s Pi day!! I know it’s not really the season for apple pies, but they are my absolute favorite pies of all time. Normally, I like my pie in the traditional sense, with a top crust. But Idk if that’s my fave anymore because this crumb topping is so crunchy and sweet, it just might edge out the pastry! I’ll have to try it with other pies, too (peach, cherry, etc).

This pie was beyond simple to throw together because of the shortcuts I recently discovered. My favorite apples to make pies with are Rome apples. Sadly, they have a very short season. When they are in season, slice them up, put them in gallon freezer bags, and add all the pie filling ingredients. Seal the bags and put ’em in the freezer. Now you can have freshly baked apple pie whenever the feeling strikes!!

Another tip for making pies quickly is to make a double batch of my gluten free pie crust and store extras in the freezer. The day before you’re ready to bake a pie, put the pie crust in the refrigerator to thaw overnight (or thaw on counter a couple of hours on baking day). It’ll be ready to go when you are!!

One final tip for this pie in particular, or any pie that has a crumb topping, is to make the crumb topping and store it in the refrigerator. It’s very similar to cookie dough and will keep in the fridge for a few days. When you’re ready to make your pie, take it out and crumble it up. It actually works better to have the crumb topping nice and cold so you can break it up in large chunks, or crumbs.

Since it’s Pi(e) Day, break out your pie pan and bake my gluten free apple crumb pie. The flaky crust on the bottom, stuffed with loads of cinnamon sugary sweet apples, followed by that out of this world crunch crumb topping will satisfy all your pie senses 🙂 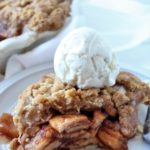